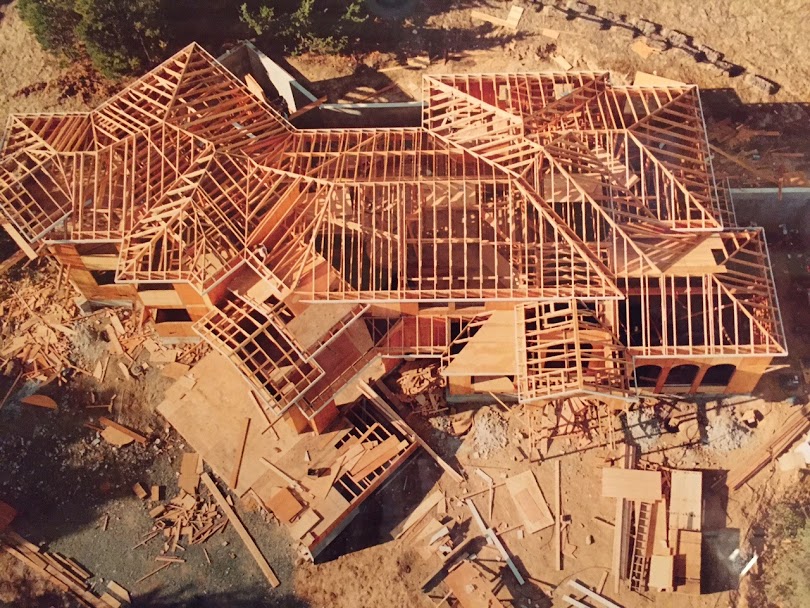 
Will began his career in construction as a job-site laborer with a shovel in his hands.  Blessed with the knack to drive nails he found a good fit in rough carpentry.  While working in the Los Angeles housing tracts during the mid 1970s Will had the opportunity to learn production roof cutting and stacking.  Ever since those early days, roofs have been his forte.  Lacking the technical side of his profession he made time to attend the Construction program at Orange Coast College graduating with an AA degree.  When roof trusses gained prominence in the late-1970s he left the Los Angeles area and moved north into the custom home market along the California central coast. There with his crew he spent the next 14 yrs specializing in framing custom homes with complicated roofs.   During that time he wrote his first book entitled A Roof Cutter’s Secrets to Framing the Custom Home (1989) and earned a BA thru night school.

In 1992 after some 20 years in the industry, Will began working as a freelance framing consultant and “traveling roof cutter”.  He did this primarily so he could divide his time between his other interests of bush flying (he is a commercial pilot and aircraft mechanic), whitewater river guiding and humanitarian aid projects.  In his new capacity he participated in the building of many interesting projects up and down the West Coast.  From 1992 – 2002 he had the unique experience to be able to teach roof framing seminars/workshops at “JLC Live” and other building conferences.  The video of his 1997 roof framing presentation at the JLC Live East conference was edited into a commercial video and made available thru JLC to the public as a resource.

In 1996 Will developed “The HeadCutter” and was granted patent #6038775 for it in 2000.  He invented this devise to replace the venerable sidewinder blade that he used for many decades when cutting roofs.  “The HeadCutter” is an adjustable saw foot that clamps to the bar of a chainsaw converting it into a vertical milling machine.  It is terrific to gang cut the head-cuts and tail-cuts on common rafters packages, square-cut TJI packages and quite popular with manufacturers and installers of insulated roof panels. BigFoot Saw manufactures and sells “The HeadCutter”.  Will used this tool along with other custom saws to help set up a production roof cutting division at National Lumber (Boston) in 2001.  Watch the video Gang cutting rafters to see the "HeadCutter" in action.

In 2002 after four years in the works, Will in conjunction with Hanley Wood republished an updated modern version of A Roof Cutter's Secrets.

In 2009, Will completed The Complicated Roof - a cut and stack workbook, as a companion guide to his mainstay.  In this workbook, encompassing the calculating, cutting, and stacking of two real life complicated roofs, he shares how he approaches difficult projects and applies the methods shown in A Roof Cutter's Secrets.
In 2012 while teaching tradesmen in Central America rough framing, Will developed the "Seat-Cut Guide Tool" and was granted patent #9120241 B2 for it in 2015 (see the roof cutting tool blog farther along).  It was designed to aid carpenters who were either forced by lack of specialty roof-cutting tools ($) or simply due to personal choice, hand-cut their rafters with a regular Skil 77.  The "Seat-Cut Guide Tool" knocked off about 30% of the time normally required to accomplish this task.  Unfortunately Will could not find a production partner so it has yet to make it the market as the "HeadCutter" did.

In 2013 Roof Framing for the Professional was produced as a two part video series. It was gleamed from a two week long roof framing clinic Will presented in 2012 and condensed down to some 11 hrs. on (6) DVDs.  Viewers have said it is by far the most comprehensive study of roof framing available on film.  For more than 20 yrs. Will had desired to make available his teaching in a visual format.
After four years in the writing, From the Top Plates Up - A Production Roof Framer's Journey along with The Carpenter Patriot - How Leftism Seeks to Kill the Workingman and Erase Common Sense were published in 2018.  From the Top Plates Up harbors a kaleidoscope of fun and informative topics along with the practical lessons Will had learned over his 40+ year career as a roof framer.
Most recently in 2020 we saw Will's Handy Formulas for Stick Framing Roofs hit the market.  This book was designed as a job-site carry mini-book, the size of your smart phone.  It contains the most commonly used figures from his classic roof framing manual A Roof Cutter’s Secrets.

Over the years, Will has written a variety of articles detailing roof and stair building topics that were published in The Journal of Light Construction, Tools of the Trade and This is Carpentry magazines (1, 2, 3, 4, 5, 6, 7, 8, 9).

While Will enjoys the physical aspect of building things he also desires to share what he has learned over his lifetime with others and to that end participates in various humanitarian aid projects overseas.
Posted by The Roof Cutter at 11:22 AM